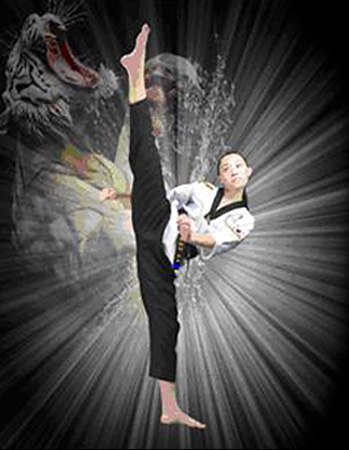 Sung Cho's Tae Kwon Do - Round House KickTaekwondo is a Korean martial art. On March 20, 1971, then Korean President Park Chung Hee declared Taekwondo to be the national sport of Korea. The image on the left side of this page is a large plaque hanging in our Taekwondo school that represents that declaration. It reads Guk-ki Tae kwon do.

Taekwondo is the national sport of South Korea. It is now one of the world's most popular martial arts based on the number of students that learn and practice Taekwondo. In 2000 Taekwondo became an Olympic event.

We follow the teachings and principles of 9th Degree Black Belt, Grand Master Sung Hwan Cho. We call him Kwahn-jang-nim, which is Korean for Grand Master. Kwahn-jang-nim Sung Cho teaches Taekwondo based on TRUE traditional Korean martial arts. Like the Korean martial artists from the time before Christ (BC), we practice with our hands up. We never practice with our hands chambered (hands by the hips) like you see at other Taekwondo schools. Chambering the hands is not true traditional Taekwondo. Chambering the hands comes from the influence Karate had on Korean martial arts during the Japanese occupation of Korea. During this time the practice of Korean martial arts was outlawed. For a while even the Korean language was outlawed.

Grand Master Sung Cho developed a new innovative style of Taekwondo forms called, Poom-sae Moo-goong-hwa. Poom-sae Moo-goong-hwa is different than WTF or ITF forms. One of the theories behind Moo-goong-wha is balance, flow and linear movements. The forms begin and end in the exact same place. They begin with the basics and each poom-sae builds on the next gradually getting more difficult. You may be familiar with the term Kata. Kata is to Karate what Poom-sae is to Taekwondo.

Stop by and experience a FREE class today. Give us a call today at 941-927-KICK (5425). You can send us an email to This email address is being protected from spambots. You need JavaScript enabled to view it..